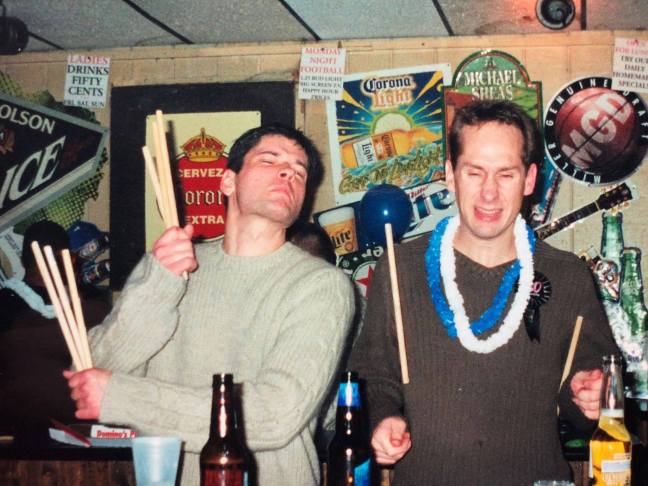 My apologies right off the bat. This is going to be a long post…  two weeks ago today one of my closest friends passed away suddenly. But Matt was more than just a close friend. He was also like my big brother. Not having a big brother (or any brother for that matter), he filled that role for me better than anyone I’ve ever known.

These past few weeks, I’ve been trying to find sufficient words to write about Matt. I’ve come to the realization that no matter how much time I take, I’m never going to come close to adequately describing how great a person he was and how much he meant to me and many, many, many others as well. So many times we hear about someone recently deceased and it’s always “he was a great guy, he’ll be missed”. Well, in this case, words like those don’t even come close. It didn’t surprise me that Matt would need two different funerals in different states and that it would take over 2 hours to get up to the front at one of his wake services. He touched so many lives so deeply.

I would not be where I am today if not for Matt. After I graduated, he saw potential in me while I was still stuck trying to figure things out. He was determined to help me and pulled me into work with him. He even went so far as having me move in with him. Here he was with Jen, still pretty much newlyweds, taking in a college buddy in as a roommate! It was this action that started the chain of events that set me off on my career path. It was an incredible thing to have done but simply one of the thousands of things that Matt did for so many people without hesitation.

Matt was the one person who was never shy about setting me straight. Just like a big brother, he called me out when I was not living up to the right standards. In college, when I probably needed it the most, he even went so far as a good headlock or arm-twist behind my back in order to get me to see what I needed to see. But it was never done with ridicule or malice. His intentions were always pure in wanting to push me to be a better version of myself. So he pushed me, challenged me and, above all else, believed in me. I learned so much over the years from Matt. He was my go-to person when I needed advice. How he knew so much, no matter what the topic, was simply amazing. He was wise beyond his years.

Matt was not only an amazing friend but an incredible husband and father to Jen and his three girls. My heart breaks for their incredible loss.

Matt and Jen were always such an incredible pair. There was no “Matt” or “Jen” but always “Matt and Jen”. Everyone who became friends with one automatically found themselves attached to both. They were the duo of duos. It was always so fun to be around the two of them. They definitely brought the best out in each other.
And as for being a Dad, he was amazing there as well. He was fun, patient, loving and always a great teacher. This wasn’t surprising as those attributes were universal to everyone he came into contact with.

I’ll always remember Matt’s positivity and connectedness. In this fast-paced world Matt always had time for you. When you called him, he was never too busy and always answered his phone with an overwhelmingly upbeat “What’s happening, man?!” and stayed on the phone as long as you needed him. Never once did he not have the time and never did he bring you down. Matt never steered the conversation to himself or looked for attention or sympathy. He didn’t get into gossip or talk ill of someone else. He was always upbeat and encouraging. He took a genuine interest in you and was always sincere in his curiosity about how things were going in your life. He was your biggest fan. You always left a conversation with Matt in a better mood. Matt just had an amazing talent to lift people up. And, of course, he was always full of wise advice, guidance and support. My last run with Matt was a microcosm of typical Matt. Our conversation as we ran had him genuinely focusing on me and deflecting the talk away from him, offering up great advice, bragging about Jen and how proud he was of her and talking about his kids and all their activities.

It’s going to take a while to come to terms with how and why this happened. It feels extremely unfair that the man with the biggest heart was given one that couldn’t keep up. The one thing I can definitively say is that if there was one person who had nothing left to prove, it was Matt. Very few people will leave behind a legacy as powerful as Matt, even if they have twice the amount of time to do so.

There are too many quality attributes that I haven’t even gotten into about Matt. My promise is to keep his spirit alive by living up to the high standards he set for himself as well as what he believed was the potential in me. Immediately following Matt’s death I had already picked up the mantra in my head, “What would Matt do?” and have been trying to use it since.

My first test of this came quick. The day after Matt’s passing, as I boarded my plane home and took my seat I was in a miserable place. Sick to my stomach about leaving Jen and the kids, with my mind in complete disarray trying to wrap my head around everything, and the passenger next to me decides to strike up a conversation. Now, the typical Dave would have answered his question, politely opted out of the conversation and then put headphones on to tune the world out. But then I remembered to ask myself, “What would Matt do?” Anyone who knew Matt knows exactly what he would have done. Whether Matt would have sensed this man was lonely or nervous about his flight or simply just wanted to talk, Matt would have stepped up and conversed with him. So that’s what I did. For the entire flight. While we waited for a gate to open up. While people gathered their luggage and got off the plane. As we walked up the jet bridge and into the terminal. It was only when I finally had to excuse myself to use the restroom did our conversation end. It wasn’t exactly easy with all that was on my mind but Matt never took the easy route. Time and again he did what was right, without question or hesitation. It’s something I will work at to the best of my abilities moving forward in his honor.

So anyone who might be reading this, by all means, please call me out when I’m not living up to his high standards and ask me “What would Matt do?”. I will sincerely appreciate the reminder.

Matt has given me (and all of us who knew him) all the guidance we need. He did his part. Now it’s simply up to each of us to follow it.

Matt, thank you for everything. I love you. I will miss you immensely.

Friends and family, and friends …and still more friends …asked if there was a way to keep-in-touch, celebrate Matt’s life, find out how they can help Jen and the girls, and pretty much, when they find themselves missing Matt, where can they turn. We hope they’ll turn to this site.